It has also been on my mind to add John Quincy Adams to the honor roll of founders. Adams was President of the United States for a single term, but was defeated for reelection by Andrew Jackson in 1828. Jackson is celebrated as one of the founders of the Democratic Party, and of party politics; he and his campaign manager, Martin Van Buren, discovered that a grass-roots, national political party was a machine with which the Electoral College, and the constitution's restraints on direct democracy, could be unseated. Adams' memory accordingly has been shouted down in repeated celebrations of Jackson's triumph. Adams was a terrible politician who hated campaigns and publicity. He sat for the first photographs taken of an American president, in which one can see his dislike and resentment of the necessities of public life. I prefer the paintings like this one (courtesy of Wikipedia Commons) that show both his forbidding public face as well as his private good nature. Adams was a "conscience Whig," a bitter opponent of slavery; he had a vision of a federal government that would reserve the vast wealth of natural resources in North America for public purposes and keep them out of private hands. Like his father, the first president Adams, he believed the United States to be a great and diverse empire, with native American and European settlements united by common ideals. Like his friend Henry Clay, he would rather be right than president; not a bad motto. Not perhaps a realistis one, and Adams died embittered by defeat, but then Whigs are the anti-realist party.

Posted by Sheldon Novick at 12:34 PM No comments:

Have you seen the film "Ratatouille"? The author-illustrators use animal images to stand for race and class. (Think of Maus.) I propose to add it to the canon of Whig literature. The story is about the encounter of an old world civilization with democracy, and the ending is a happy one, albeit not sentimental. Civilization is the art of living, and can be enjoyed by anyone, even a rat. But art cannot be made by anyone, only a genius can work the magic it requires. A genius can come from anywhere, however, can even be a rat. The enemies of art are the twin dangers of democracy, commerce and politics. A rat chef evades them, by practicing his art in a modest cafe, for both humans and rats. (This is Henry James's The Tragic Muse, in which a Jewish actress revives English drama, which had been decimated by commercialism and government censorship.) Well, yes, I know "Ratatouille" is just an animated cartoon. But that is the point, non?
Posted by Sheldon Novick at 11:38 AM No comments: 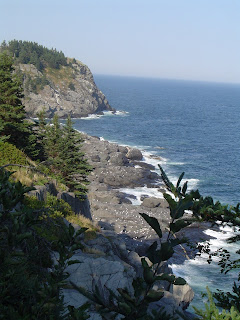 I haven't been keeping up my whiggery in recent weeks. Part of the reason can be seen in this photo of Monhegan Island, of the coast of Maine. There is a little fishing village / artists' colony, but most of the island is protected by a conservation easement, and outside the village, aside from hiking trails, there are only the farms abandoned decades ago, gone back to spruce and pine, with their bleak views of the sea. This is New England; it is not wildernes, but an inhabited place that constantly reminds one of the sea-going past. My blog began as a commentary on current affairs from the perspective of the past, but I think the past -- or at least what continues, what has been saved from he wreckage of time (in Henry James's phrase) -- has a better claim to attention.

So I look at this image and think of the work that I have been doing recently, the biographies of Henry James and Oliver Wendell Holmes. Two more different men can hardly be imagined, and yet their lifelong friendship was founded on what they shared. A common admiration for the art of life, for instance, which for both of them was to be seen and learned in Europe. This art rested on the freedom that a few people had gained as the profit of centuries of injustice. They each knew that bleak truth, and each in his own way pursued the ideal of harmonizing justice and beauty, America and Europe; of creating a democratic civilization.

Each thought of his own career as a performance, and tried to make it not only beautiful but sublime (strange words to use about a lawyer, I know). Holmes and James were both poets, each in his own way; performing their own works. Fine art is the strategy of the powerless, and neither of them had much power in the material sense. Each lectured on the duties of the powerful, the self-restraint that alone provides a hope for a moral civilization. Hard to talk about any of this today, at least in the English-speaking world.